How Playing Inbounds Wins the Game 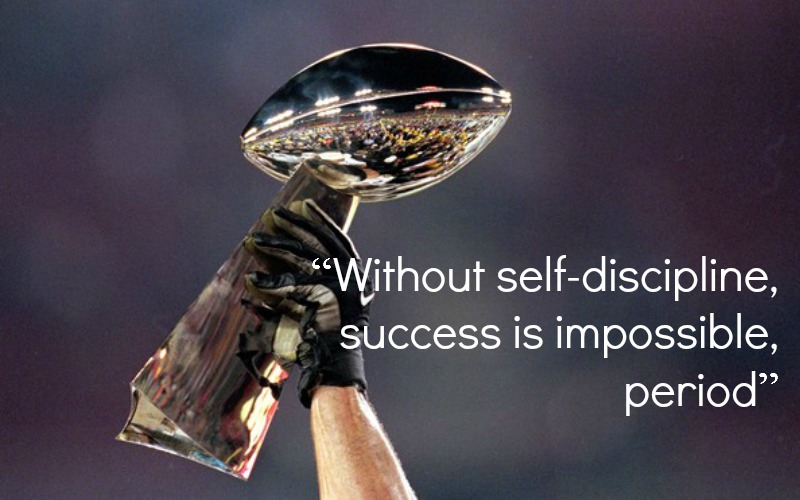 Were you one of the 115 million people who watched Super Bowl 50 a few weeks ago?

Then you’ve already seen a prime example of how playing inbounds can ultimately lead to victory.

Playing Inbounds: The Path to Greatness

An important component of WINology is how playing within the confines of the game — or playing inbounds — is essential for cementing greatness. (Chapter 8 of my book, WINoloy – World Class Performance covers this in detail!)

And while you can and will feel the temptation to stray off course because you want something so badly, you won’t win in the end. Oh yes, you might win in the short term — cheating might earn you more money, for example, but at what cost in the long run?

So how do you earn trust, prestige and an honorable reputation that will lead to your own personal greatness?

Through accountability and self-control.

Let’s take a look at a literal example of this and compare how playing inbounds works in both football and in real life.

Self-discipline is the reason why some linebackers never get into a shoving match after an emotionally charged play or why a running back refrains from an over-the-top “End Zone Dance” to avoid an Excessive Celebration penalty.

In football, being able to control your actions is the name of the game, and it’s important off the field too.

Everyone has their danger zones — those moments where it’s easy to slip outside of your regimen and tread into self-destructing territory. It could be straying in your marriage, padding your expense account or even getting “verbally” violent with someone.

Be Mindful of the Game

The good news is that by being mindful of the game — knowing where you’re likely to step out of bounds — is half the battle. If you know what your temptations or triggers are, you can take preventative actions and stay on course.

For example, if you know you anger more easily when you’re tired, hungry, or while enjoying an adult beverage, be aware and avoid situations where you’re likely to get into an argument. Go take a power nap, eat a Snickers, and absolutely practice moderation.

The Big ‘A’ Word: Accountability

Accountability is everything when it comes to team sports, which obviously includes football, but also includes your everyday life.

Veritably every action you make has an effect on your inner circle — whether it’s your coach, your teammates, your family or your colleagues.

After all, the player who grabs a face mask or who hurts another player through a late hit isn’t just injuring the other team — he’s hurting his own teammates through the ensuing penalties.

Being accountable means taking responsibility for your actions. It also means being accountable to someone other than yourself. As a kid, it might have been a parent, teacher or coach.

It’s gets a little trickier as an adult, but it’s essential to winning in life. We talked about how to choose someone to be accountable to in a previous post.

One of the reasons why Peyton Manning is an icon for so many is his leadership and accountability to his teammates, his fans, his coaches, his family. And Broncos fan or not, Manning is someone who is achieving greatness on and off the field.

Manning understands how his actions and words impact others. You won’t see him at a press conference lamenting the things his team did wrong, the things that he did right, or how he feels about questionable referee calls.

“A body of men holding themselves accountable to nobody ought not to be trusted by anybody.” – Thomas Paine

Football season may be over, but the rules of the game should stay fresh in your mind. By playing inbounds and exercising self-control, you’re well on your way to securing and maintaining your status as an MVP in all arenas!

How do you exercise self-control in stressful situations? Let us know in the comments section below!