The Right Way to Apologize 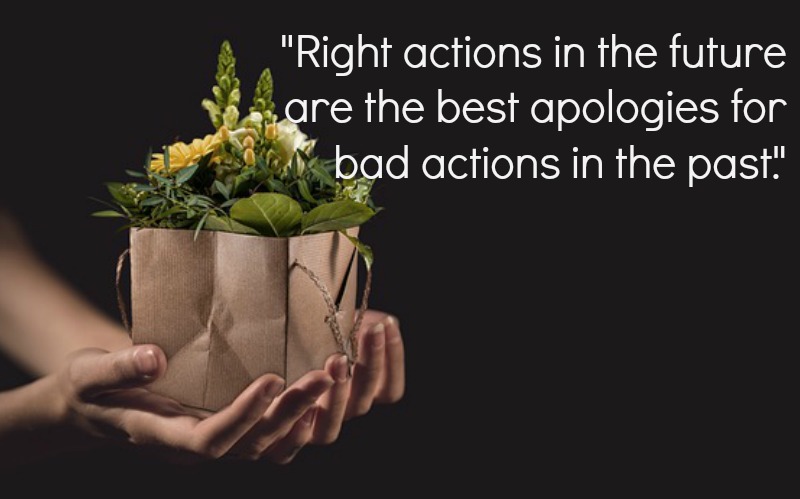 At some point, all of have had to apologize for something. Whether you’re a high-ranking politician, a manager, a football star or even a parent, we all make gaffes or mistakes that require a mea culpa on our part.

Maybe you lost your temper while in the middle of an argument, or said or did something that unintentionally hurt someone you love or respect.

Or, you assumed a coworker or subordinate did something wrong and you called them out on it — only to find out later that you were wrong. Mistakes like these can create a toxic work environment and can significantly lower employee morale and productivity.

However, knowing how to apologize can make a big difference in reducing subsequent harm — in personal and professional settings.

When It’s Time to Apologize, Do It the Right Way

So what makes one type of apology more effective than another?

Turns out that science can help us out here.

A recent study in the May issue of Negotiation and Conflict Management Research identified six components of an effective apology:

Now, it can seem on the surface that some of these are quite similar, but they aren’t. A good apology doesn’t necessarily need to include all components — and some components are more important than others.

Which Components Are Most Important?

Oddly enough, researchers discovered asking for forgiveness is the least effective part of an apology. Why? Because you’re putting the person on the spot and making them feel like they owe you in something instead of the other way around.

You may have crafted an excellent apology that includes 1 – 4 above, but if you don’t deliver it in an effective way, your well-crafted apology will lose its effectiveness immediately.

Another study looked at how CEOs and other leaders apologized to the public about a mistake or poor decision — and what effect the apology had on the company’s stock and profits afterward. The study found that if the speaker smiled or acted unconcerned, the public mistrusted the apology and the organization’s reputation suffered — and sometimes endured financial losses.

On the other hand, if the speaker exhibited humility and sincerity, the public was more open to accepting the apology and the organization’s reputation did not suffer.

How to Convey Sincerity When Apologizing

Whether you’re the head of an organization, a colleague or a spouse, sincere apologies have common denominators.

In Person Is Best

A quick text to apologize to someone that you’re running 5 minutes late may be OK, but a text or email is not the way to apologize. Try to apologize in person whenever possible — the bigger the mistake, the more important it is to be physically present.

Don’t mumble, look away or display defensive body language such as standing away from the person with your arms crossed. That behavior will undermine your words. Research has found body language conveys far more than we might realize.

Admit you are in the wrong or your part in the mistake. How many times have you heard someone say, “I don’t want anything from XYZ, I just want them to admit their mistake” — people are far more willing to accept your apology if you’re willing to accept responsibility.

Minimize or Repair the Damage

Look for some way to make things better for the other person. Don’t underestimate the power of a small gift such as flowers, a cup of coffee or lunch to further show the person you offended that you truly are sorry. But even more important, if you caused some kind of damage, whether to reputation or otherwise, do what it takes to repair it.

Offering an apology is uncomfortable — which is why so many bad apologies have been mumbled over the years. But apologizing doesn’t have to be — and if done correctly, you can strengthen your relationships and demonstrate leadership.

Fight for What You Want — No Apology Needed

Want to learn more about how you can go after what you want for your organization — the right way — so you’ll have no need to apologize to anyone? Schedule me to speak or conduct a workshop where you’ll learn how to beat your competitors by fighting for what you want. I combine what I learned as world-class athlete with your organization’s needs and teach you how to win.

Learn more about my speaking and training services!

Does your organization need to be more competitive to keep up? Let us know in the comments section below!

Summary
Article Name
The Right Way to Apologize
Description
We all make mistakes, but knowing the right way to apologize can repair the damage and demonstrate your leadership skills. Here's a hint: don't ask for forgiveness.
Author
WINology

POSTED ON: Building & Maintaining Relationships, Leadership
TAGGED : Accept, accept responsibility, effective apologies, how to apologize, Mistake, what not to do when you apologize