Recognizing the Gems in Your Organization 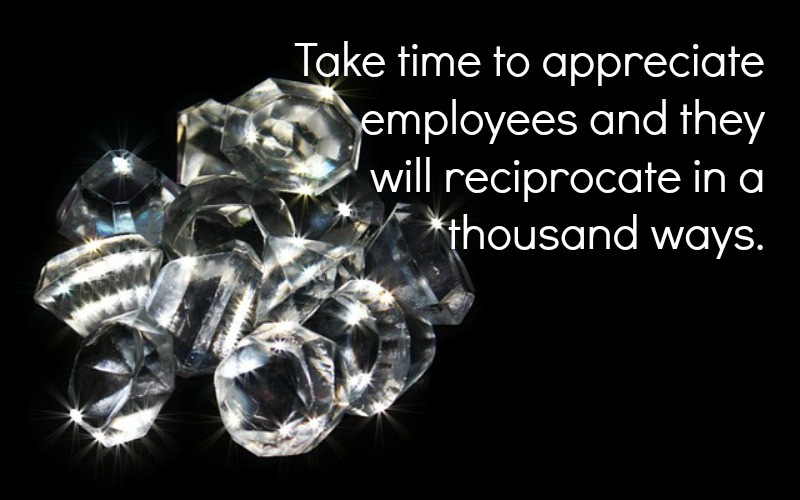 Meet Mario. Mario is a 26-year-old customer service agent at a call center. He works on a team of about 25 agents who all report to their manager, Janelle. Mario has been an employee at the call center for about 18 months. He’s never missed a day of work, often arrives a few minutes before his shift starts, and handles customer calls with efficiency and consideration.

Mario is the first person Janelle calls to see if he can come in on his day off to cover someone who called in sick. Mario has received a few raises, at pre-determined intervals such as his 6-month and 12-month anniversaries.

Janelle thinks highly of Mario, but rarely talks with him. She has her hands full, dealing with agents who continually call in sick, are chronically late or have trouble solving customer issues quickly and politely. It’s not uncommon for her to have to let someone go, and then she’s scrambling to hire and train replacements.

Mario has never complained about not being recognized for his steadfast, superior performance, but his girlfriend has been telling him he should look for another, better paying job. She tells him that with his skills, he should be moving up into a management role. Guess what? His girlfriend may be right.

Is Mario a Gem Employee Being Overlooked?

As a team leader, department manager or CEO, you’re busy, maybe even frazzled trying to keep up with all of your responsibilities. But while you’re putting out fires and taking charge, there may be a couple of overlooked employees who are quietly stepping up their game. These are the people — like Mario — who you want to keep on your team — and maybe even promote.

These are employees or team members who will help you succeed in your long-term goals. After all, the best employee is one who makes your life easier, but when you have a larger company or a lot of different personalities under one roof, it can be hard to single these people out.

How Do You Identify the Gems?

While some of your top performers are easily recognizable, make sure you’re not overlooking some less obvious MVPs. Here’s what to look for:

When It Comes to Problems, They’re Always under the Radar

The tricky thing with recognizing great employees is that sometimes the more troublesome team members garner the lion’s share of attention. They’re the ones who miss deadlines, call in sick, stir up office politics or always need a little micro-management to produce quality work.

But what about their polar opposites? Start thinking about the team members who you never have to correct or follow up with. They always produce top-notch work on time. You might not spend as much time with these folks simply because their quality of work is that strong — that’s a clear indication they’re worth retaining and investing in.

They Have Other Team Members’ Respect

This can be a tricky factor to pinpoint. Why? Because being well-liked and being respected can look surprisingly similar, but there’s definitely a difference between the two.

Is the employee the one who everyone asks out for happy hour — or is she the one who people turn to when something goes wrong? Look for the team member who your other employees go to for help.

If you love your job, you’ll do it well. It’s as simple as that.

And your hidden gems will show that they are invested in their jobs in a number of subtle ways:

Recognize and Reward Your Gems

Above all else, you want to retain and reward the folks who really enjoy working for your company. They’ll be your most dedicated employees who truly want to be a part of the organization’s success — not merely there to pay their bills.

I’ve said it before and I’ll say it again — relationships are currency! Investing time and effort into building and strengthening relationships with others, yes, even your subordinates — is a surefire way to achieve your own goals and success.

And by acknowledging these gems — whether it’s a raise, a promotion, a “free” day off or just a hefty dose of genuine praise — you’ll be a step closer to having a team that’s completely filled with MVPs.

A Word About Introverts

While a promotion may seem ideal to you, it might not appeal to an introvert. Ask your quiet MVP what they would prefer — a top-performer who is an introvert might not do well or be happy as a manager of entire team, but could be promoted to a “technical lead” or other position that would better fit their personality.

Need Some Help Motivating Your Team to Rise to New Challenges?

Consider scheduling Joel to speak or host a workshop at your organization. Joel speaks and coaches teams regularly at numerous organizations with both local and national reach. He designs WINology workshops customized to your organization’s specific needs and goals. Visit us online to learn more about Joel’s speaking or training services!

Have you been guilty of overlooking gems in your organization? Let us know what happened in the comments section below!

Summary
Article Name
Recognizing the Gems in Your Organization
Description
Sometimes it's the quiet employees who you never have to deal with who are your most important ones. Here's how to recognize your top performers who you may have overlooked.
Author
WINology